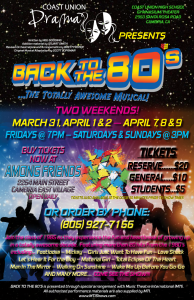 Audition materials will be available in the CUHS office starting Nov. 16th.

“The Greatest Parents Ever”
“Crushed”
“The Spot”
“!3 Ways to Screw Up Your College Interview”

We did not get a very big crowd for the “post mortem” last Tuesday after school, but those who were there offered valuable insight of which I wish to share with everyone. Before I get started, I want to mention that these sessions are very valuable for the continued success of this program. It is better to learn the “easy” lessons in this environment, not in the big arena of the Spring Musical.

And one more thing, I was extremely proud of the way you all pulled this off. I know the inaugural CUHS Drama’s Fall Production was not quite in the league of SNL, but it came very close. The combined audiences approaching 300 (170 on opening night alone!) received a worthy theatre experience that night. Your preparation, responsiveness, and decorum were on par with professional theatre, and the patrons recognized this. So, congratulations! You all did an awesome job. And I know virtually all of you had as much fun as I did putting this on.

– Actors working with the tech crew

– Promoted interest in theatre at the middle school

– Actors were not intimidated by the large, overflow house

– High level of enjoyment by the audience

– The four casts were awesome

– Everyone covered well when lines got off

– Made more than enough to cover expenses

– Cast input in the creation of each show was key

– The three directors enjoyed working with their respective casts

– The plays that were selected

– The casts had fun

– One or two individuals’ backstage behavior and misuse of props

– Backstage was a bit crowded

– Sets not weighted down

– Not enough photos (the ones Debbie took are terrific, but we would like to see more)

– Lines need to be delivered slower and louder overall

– Props sometime not in correct place

– General lack of backstage, particularly regarding the audience sight lines

– Lack of a full house on Saturday evening

Okay, it is now time to move on to Young Frankenstein. Let’s build on this experience and make the 2015 musical the best ever.

10 Ways to Survive the Zombie Apocalypse

All vocal rehearsals from 2:15 to 4 PM in the music room